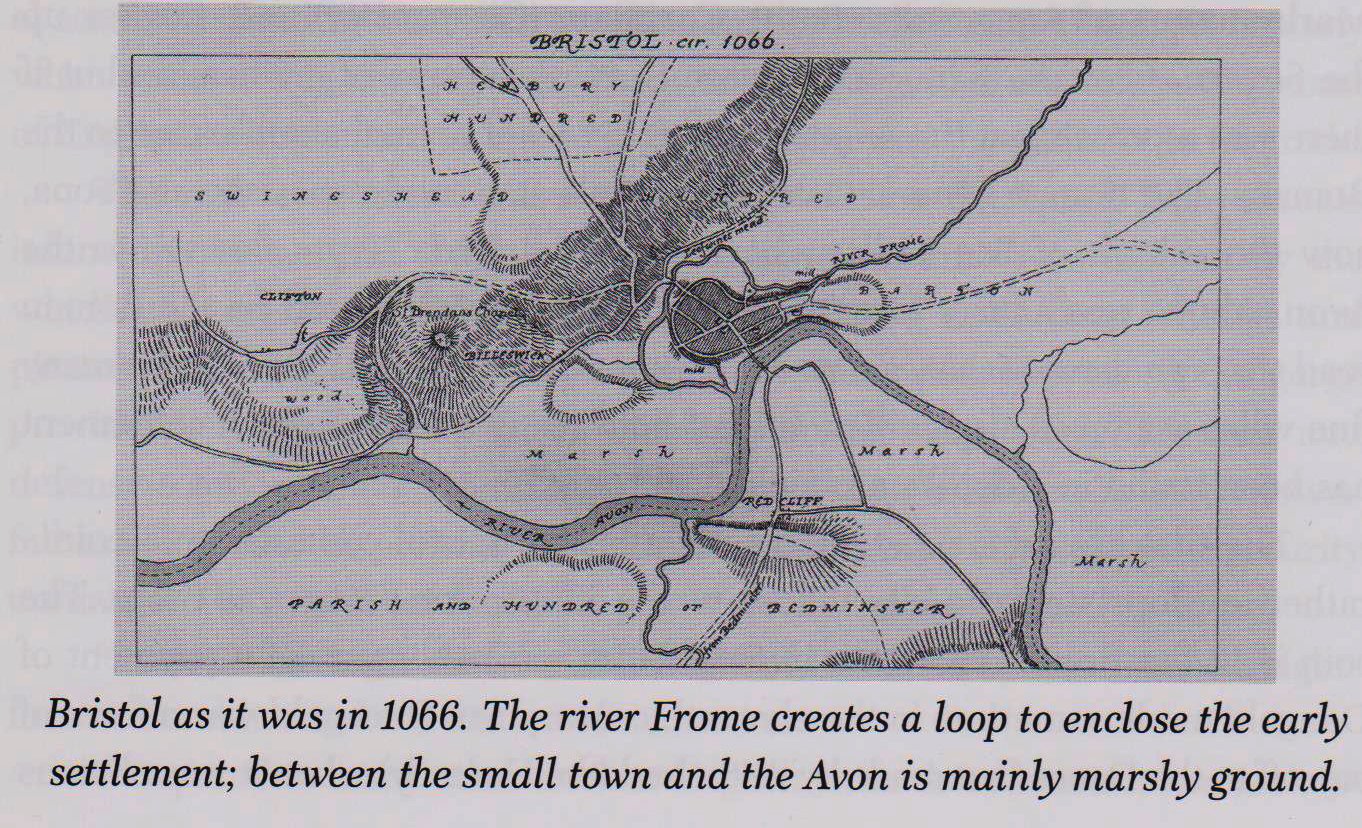 1066 – The only crossing over the Avon River at Bristol is ‘The Bridge’, a wooden structure, where Bristol Bridge is today.

1088 – Bristol Castle built as a wooden structure with a moat.

1145 The Temple Fee was the eastern part of the marshland from the manor of Bedminster given in 1145 by Robert, Earl of Gloucester to the Knights Templar. Now the Temple Area adjacent to the Floating Harbour.

1188 John was King of England from 1199 until his death in 1216. A charter granted in 1188 by John while Count of Mortain, protected the Bristol trade in wine, cloth, leather, and corn from competition.

1240 to 1247 – River Frome diverted from roughly along St Stephens Street and Baldwin Street to the Avon, South of Bristol Bridge, to its current route and called The New Channel or St Augustines Trench.

1349 – The Plague Black Death reaches Bristol via its port.

1373 – Redcliffe and Bedminster incorporated into the City of Bristol by proclamation of Edward 111. Bristol is the first town to be given the status of a County.

1415 – Eight Bristol ships carry soldiers to Northern France for the battle of Agincourt.

1497 – John Cabot sets of from Bristol on his voyage to North America.

1552 – Edward V1 grants a Royal Charter to the Merchant Venturers to manage the port of Bristol.

In answer the king granted a charter, incorporating the old fellowship with the title of the Merchant Venturers of Bristol, giving the company self-government, providing that no artificer or any other person should engage in commerce beyond seas, unless he was admitted into the company, and that right to admission should only be obtained by apprenticeship to the mistery of the merchants. One effect of this grant was, to shut out men of small means from making little ventures on their own account. From henceforth the foreign trade of the city was to be under the control of a society, which naturally opened its doors to few save the rich and the sons of its members.

1655 – Bristol Castle and its defensive walls demolished by order of Cromwell.

1662– City Corporation put a tonnage limit of 60 on ships because of the number grounding on the passage up the Avon. The fine was £10.

1673 – According to Millerd’s Map, Broad Quay called ‘The Key’, Narrow Quay ‘The Wood Key’ and Welsh Back ‘St Nicholas Back’.

1737 Bristol overtakes London as the number one slaving port in England with 37 voyages that year.

1747 Liverpool overtakes Bristol as the top slaving port with about 49 voyages to Bristol’s  average of 20.

1775-6 Old Powder House was built to store gunpowder at Shirehampton.

1762 Champions Dock built as a wet dock by William Champion.

1770 Hotwell Dock made into a dry dock in Stotherts Shipyard.

1780 Hilhouse’s Redclift Shipyard in operation between 1780 and 1786 to the South and East of the mouth of Colliters Brook.

1791 The House of Commons rejects a call by William Wilberforce to introduce an Abolition of Slavery Bill. There are celebrations on Brandon Hill.

1793 William Bridges unveiled a proposal for a new bridge that would pay for itself at site of Clifton Suspension Bridge.

1820s Mylnes Culvert built to divert sewage from River Frome to The Cut.

1834 The Underfall replaces the Overfall to regulate the Floating Harbour depth.

1840 Railway from London comes to Bristol.

1844 Brunel commissioned to design a replacement for Southern Junction Lock.

1844 Exeter joined to Bristol by rail.

1848 Conrad Frinzel rebuilds the sugar refinery to become one of the largest in England.

1848 Bristol connected to Plymouth by rail.

1848 Bristol Corporation takes over management of the port from the Merchant Venturers.

1852 Stotherts Shipyard starts in what is now Pooles Marina.

1856 The Patent Heave-Up Slipway was built in Underfall Yard replaced by the current slipway in the 1890s.

1858 The Dock Masters House built at Cumberland Basin. It had to be demolished in 1964 to build Brunel Way and Plimsoll Bridge.

1860 The first Bedminster Bridge (Harfords Bridge) was rammed by the Fanny Chapman and badly damaged.

1860s The culverting of the Frome from Wade Street St Judes begins and continues down to the Stone Bridge in the latter part of the 19 Century.

1860/1 East side of Bristol Bridge widened by 12 feet and ironwork added.

1861 Mayflower steam tug built in Bristol. She is the oldest Bristol-built ship afloat and is believed to be the oldest surviving tug in the world. 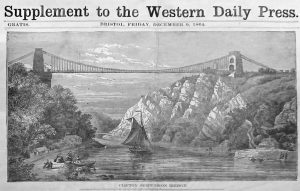 1868 The 1863 swivel bridge from North junction Lock was removed, shortened, and used to span the entrance to Bathurst Basin (Commercial Road Bridge).

1868 The Drawbridge was installed in St Augustines Reach.

1873 Howard adapts Brunels South Junction Bridge swivel bridge to use across North Junction Lock which opens on the 19th July.

1873 West side of Bristol Bridge widened by 12 feet and ironwork added.

1875 St Phillips Bridge which replaced a ferry at Counterslip in 1841, stops being a toll bridge.

1878 The Fairbairn Steam Crane built by Stothert and Pitt to a design by William Fairbairn. It could lift 35 tons.

1882 Harfords Bridge (later Bedmister Bridge) rebuilt as it proved not to be strong enough for horse drawn vehicles.

1888 The Pump House replaced by a steam pump in Underfall Yard.

1893 River Frome culverted from Stone Bridge down to the junction of Clare Street and Baldwin Street.

1895 New Gaol was sold to The Great Western Railway. Most of the buildings were demolished and replaced with a coal yard and railway sidings.

1896 The Drawbridge was replaced with St Augustines Bridge.

1899 Tramway Generating Station, a Grade II listed building built at Counterslip Wharf which operated as the power station for Bristol Tramways until 1941.

1906 Ashton Avenue Bridge built for the docks railway with a roadway overhead.

1938 Frome culverted from St Augustines Bridge down to the bottom of Park Street.

1939 Totterdown and Bathhurst Locks decommissioned to reduce risk to the docks from bombing.

1947 Bristol twinned with Hanover leading to the naming of Hanover Quay.

1959 Another carriageway added to the Bath Road Bridge. Opened 1960.

1984 Porto twinned with Bristol leading to the naming of Porto Quay.

2016 Albion Dockyard stopped trading after the retirement of David Abel.

2017 Prince Street Bridge refurbished and made one way to road traffic (South).

2020 Chocolate Path Collapses into The Cut in January.