In 1820 Hilhouse & Sons developed the New Dockyard (Chatham Yard), and built two wet docks, a dry dock and building berths. This was to replace their Hotwell Dock. Charles Hill had joined the Hilhouse Company in 1810 as a shipwright and in 1845 he took over the company and it became Charles Hill & Sons and was called Albion Yard from 1848. Charles Hill & Sons went bust in 1977 and in 1980 the Albion Dockyard was taken over by Abels Shipbuilders. Abels stopped trading in 2016 after the retirement of David Abel.

The new dockyard for Hillhouse and Sons built on virgin bankside. In the background is Sydney Row which was built for key workers at the dockyard.

To the right of this picture you can see the clock tower on the Dockside Offices.

Top left is Steamship House, in Great Western Dockyard, where the SS Great Britain engine was built which was bombed in 1942. In 1917  it was Wickham and Norris, Timber Merchants.

Top centre is McArthur’s Wharehouse which was demolished in 2019. In the late 19C it was a working malt-house. 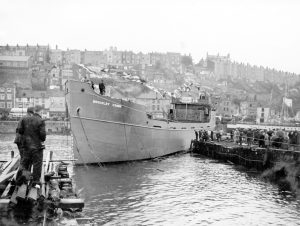 PBA790 30 05 – 1938 – Launch of mv “Brockley Combe” at Charles Hill’s Dockyard. HMS “Flying Fox” (distant, far right) has been moved from her usual mooring on Mardyke to accommodate the launch.

This building was the head office of Charles Hill. To the right you can see the Banksy art work of October 2014 ‘ Girl with Pierced Eardrum’ which was vandalised the day after it was painted.

Richard Rankin, the owner of No. 7 Boats, also holds the honorary title of  ‘Swan Keeper’.

According to Mr Rankin there are up to 40 swans on the river at any one time so 28 in one place could be a record.

In July 2018 the SS Great Britain Trust revealed a new partnership with the newly established the neighbouring Albion Dock Company in collaboration with Bristol City Council.

The Pelican of London  is the first ship in the Graving Dock under the new Albion Dock Company.