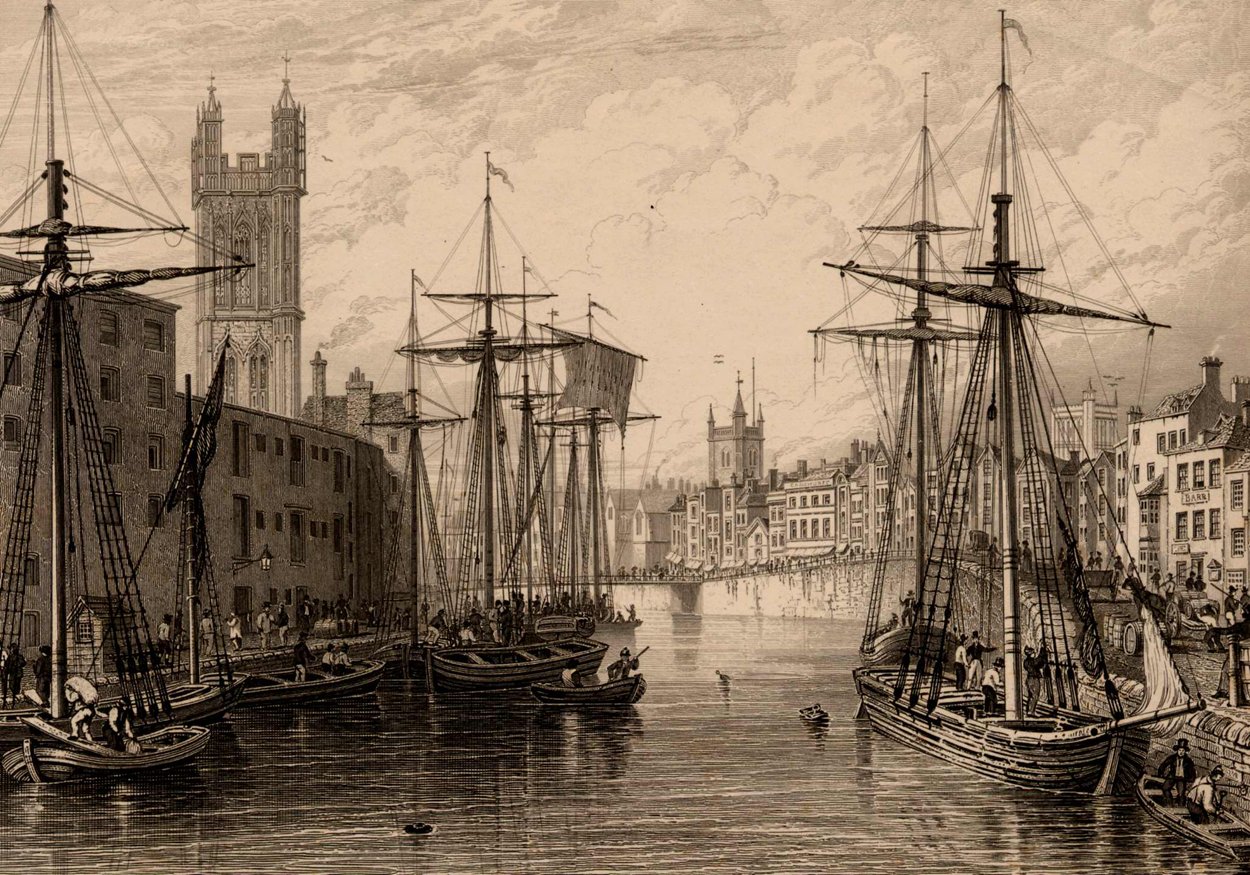 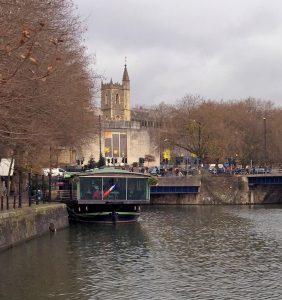 Between 1240 and 1247 the original course of the Frome (roughly from The Glassboat at Bristol Bridge along Baldwin and St Stevens Streets) to its current course to provide more dock space. The dug out section was called The New Channel.

According to The Bristol Packet boat company the left hand section of Bristol Bridge (seen from South) is the former mouth of the Frome. It is undoubtedly close to the right spot but it is strange that since 1247 when the river was diverted it has survived several major rebuilds of the bridge?

St Augustine’s Place, as it was then known, prior to the building of Colston Street. The location is recognisable, even though practically none of these buildings remain. The dark-fronted building with Gothic windows, towards the right, is the Salem Chapel, while at the top right of the picture are the windows of the Lodge Street Chapel. C1860

In the middle right you can see the figurehead of the sunk ‘Demerara’.

The Magpie newspaper, whose office can be seen on the left, started publication in 1884. Handcarts, a gas street lamp and a windlass can be seen to the right.

The Stone Bridge can just be seen at the far end on the left, its arch partly hidden by a leftward turn of the harbour wall. The churches of St Mary-on-the-Quay (left), St John-on-the-Wall (centre distance) and St Stephen (right) are about the only buildings recognisable today.

The Water Bailiff’s Flag Staff and Signal Tower, used through much of the 19th century to control the movement of shipping in the Reach. It was demolished for the construction of E Shed in 1894.

The Dublin Shed was built in 1861 and demolished in 1937 when the Frome was culverted at Broad Quay.

The churches above from left to right are St Stephens, St Werburghs (moved to Mina Road in 1878), Christ Church, All Saints and St Nicholas.

The Drawbridge seen here, opposite what is now the end of Baldwin Street, was installed in 1868; and the small shed beyond it was replaced in 1879. There are no tram-lines visible, so the photo is probably from 1875 or earlier.

The chapel of St Mary-on-the-Quay is clearly visible in the distance to the left. A paddle steamer is berthed at Broad Quay.

The crenellated tower near the middle of the picture is the Water Bailiff’s Flag Staff and Signal Tower, used through much of the 19th century to control the movement of shipping in the Reach. It was demolished for the construction of E Shed in 1894.

The dam was put in place while work was under way to fill in St Augustine’s Reach between the Stone Bridge and the Drawbridge (further up the Reach from here). After the work was completed in 1893 the stretch from here to the Drawbridge was refilled with water for another 45 years, until the rest of the Centre was covered over in 1938.

The floating harbour in front of the Hippodrome has yet to be filled in (1938), but the predominance of motor buses (as opposed to trams) suggests that this is probably well into the 1930s.

In 1893 The Frome was culverted from The Stone Bridge down to the junction of Clare Street and Baldwin Street. The Drawbridge was replaced with St Augustines Bridge.

The Industrial and Fine Arts Exhibition  was held in a specially built wooden hall at the bottom of Colston Avenue near St. Augustine’s Parade. The hall was 110 feet wide and 520 feet long and cost £11,000. It was lit by 20 electric and 400 gas lamps. The hall featured the first electric clock in Bristol. The exhibition itself was part promoted by J. W. Arrowsmith who owned Arrowsmith’s the printers. It was opened by the Mayor, Mr. (later Sir) R. H. Symes. The exhibition made a profit of £2,200 which was donated to local charities. Around half a million people visited the exhibition during the five months it was open. The only trace of the exhibition now is a fountain by the Colston statue. 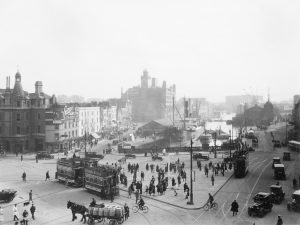 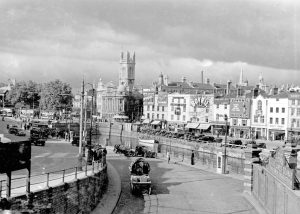 In 1938 The Frome was culverted down to the bottom of Broad Quay.

“Pacific Coast” at W Shed, “Empress Queen” on Narrow Quay. View towards Centre; the Hippodrome still has its tower and globe. 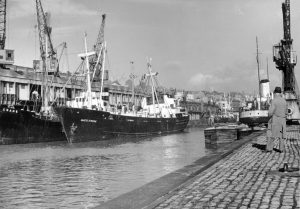 Less-than-life-size replica of HMS Centurion, the ship that carried the first missionaries of the Society for the Propagation of the Gospel to America in 1691, built to mark the 250th anniversary of the Society. Moored at Narrow Quay, with the CWS building off right.

Cabot came to live in Bristol for the purposes of his trade, and while there applied for, and on March 5, 1496 obtained from Henry V 11. a patent for discovery for himself and his three sons, Lewis, Sebastian, and Sancius, to sail to all parts of the east, west, and north, with five ships at their own cost, under the royal banner, and to take possession of new islands and countries, paying the king a fifth of their gain from each voyage On arriving at the port of Bristol, whither they were bound to return. He set sail in the early part of the May of the next year in a ship said to have been named the Matthew, manned by eighteen sailors, nearly all of Bristol. His son Sebastian probably sailed with him. Land was discovered on June 24. This seems to have been the northern coast of Cape Breton*.