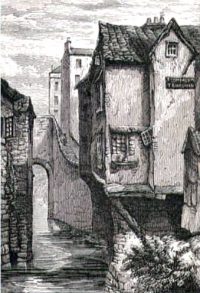 Bristol River Frome is sometimes called that to distinguish it from other rivers called The Frome – There is another entering The Avon to the East of Bath. The name Frome is believed to come from a Celtic river name fram, meaning, brisk or fair.

Between 1240 and 1247 the original course of the Frome (roughly from The Glassboat at Bristol Bridge along Baldwin and St Stevens Streets) to its current course to provide more dock space. The dug out section was called The New Channel.

In The Port of Bristol in the Middle Ages by JW Sherborne – 1971 – Bristol Historical Association he says:

On 27 April 1240, after digging had already started, Henry III ordered the men of Redcliffe to help the burgesses of Bristol who ‘for the common good of the whole town of Bristol as of your suburb have begun a trench in the Marsh of St. Augustine (so) that ships coming to our port of Bristol may enter and leave more freely and without impediment.’

According to The Bristol Packet boat company the left hand section of Bristol Bridge (seen from South) is the former mouth of the Frome. It is undoubtedly close to the right spot but it is strange that since 1247 when the river was diverted it has survived several major rebuilds of the bridge?

However, the exact route is the subject of some debate. In The Port of Bristol in the Middle Ages by JW Sherborne – 1971 – Bristol Historical Association he says:

The area of marsh involved requires careful attention as it supplies the key to an important topographical problem, the course of the Frome before its diversion. Two answers have found favour. One was written in the later fifteenth century by William Worcester who recorded Bristol tradition on this matter. His description became the orthodoxy of Bristol history until 1821-23 when Samuel Seyer published his distinguished Memoirs of Bristol, in which he attempted a substantial modification of what Worcester had written. His ideas have been followed by most subsequent writers. Although Worcester is sometimes hard to understand, with respect to the Frome he is clear. Before its diversion, he says, the river flowed from Frome Gate Bridge past the east end of St. Stephen’s church along Pill Street and the south side of Baldwin Street, joining the Avon below the bridge. Seyer, however, decided that ‘the current through Baldwin Street was formed artificially as a town ditch’ and that ‘the natural current of the Frome must have been through the marsh’, i.e. some distance to the south of Baldwin Street.

Sherbourne comes down clearly in favour of the views of Worcester by analysing further the basis of Seyer’s argument. 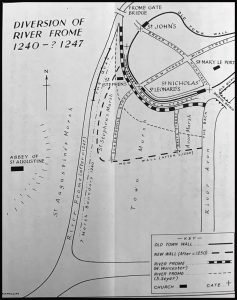 Peter Aughton in Bristol – A Peoples History  (2000) has the original course of the Frome entering The River Avon to the South of this point at about the site of The Glassboat mooring.

William Hunt and Edward A Freeman in Historic Towns; Bristol. Third Edition 1889 describe the route of the river as follows:

At this time the Frome, which bounded two large sides of the peninsula, probably flowed as it does now in a somewhat narrow valley between the Millstone Grit of St. Michael’s Hill and the New Red Marles on which the old town was built, until it reached the eastern spur of the triangular hill of Trias Marls and Sand-stones now called College Green. This spur turned the stream abruptly in a south-easterly direction, and so it ﬂowed across Marsh Street and Back Street into the Avon, near the old churchyard of St. Nicholas. In early times, however, the river seems to have been tapped about the end of Small Street to form a mill-stream which ran through (old) Baldwin Street, drove Baldwins Cross Mill, a name probably later than the Conquest, and so flowed into the Avon. After the new course of the Frome was dug in I247-8, the old channel was still marked; for in the fifteenth century Marsh Street was also called Skadpulle Street, and a hundred years later great pools apparently stood in the course here indicated.

Bridwell Bridge at bottom of Bridwell Street had in 1250 been Monks Bridge.

From about 1860 to about 1890 The Frome was culverted from Wade Street St Judes to Stone Bridge Rupert Street. This included the area near Castle Park where there were three bridges in a row from West to East at the bottom of Merchant Street, Philadelphia Street and Pen Street. Merchant Street and Penn street still exist in 2019 and rather oddly the name Philadelphia Street lives on but instead of being parallel to the other two streets  it now is at 90 degrees and runs between them.

Although there is a mystery the City Council Map of 1949 below shows no culverting along River Street up to Wade Street?

In the middle right you can see the figurehead of the sunk ‘Demerara’.