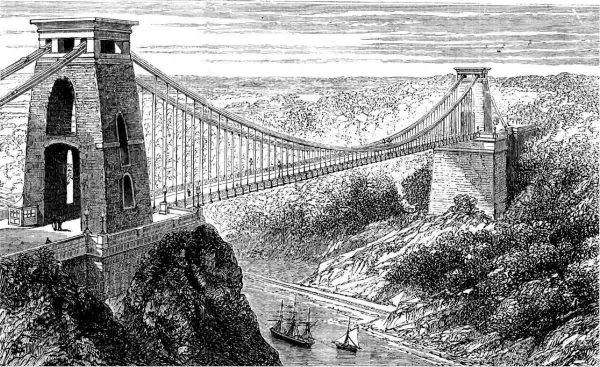 The man-made infrastructure in the Bristol Docks has changed enormously over the last thousand years.

In 1066 ‘The Bridge’ had already been built on the site of the current Bristol Bridge, joining the Castle and main settlement in Gloucestershire with Redcliffe in Somerset. There was also a bridge over the Frome joining the main settlement with the road North.This was at the bottom of Christmas Street where the river Frome flowed along what is now Rupert Street.

Two other small bridges at least existed on the road West over St Brendans Channel and the Sand Brook. The first was roughly on Frogmore Street and the latter at the foot of Jacobs Wells Road.

The final bridge marked on the 1066 map was Brightnee Bridge which crossed the river Malago, probably where East Street meets Dalby Avenue on the A38 going South.

All these bridges would have been wooden.

By 1250 a further eleven bridges had been added across the Frome and the moats and ditches surrounding the Castle. Most were gated and fortified.

By 1250 no new bridges had been built over New Channel , the new route of the Frome.

In 1673 we get Millerds map which shows little change over the last four centuries. There is one extra bridge at the West end of Broad Mead and, because there is no longer a ditch from the Frome to the Avon on the East, there is also now no bridge to the East of Old Market Street.  Most of the fortifications have gone as the Castle was demolished in 1656.

In the 1300s The (Bristol) Bridge was rebuilt in stone.

1844 Chilcotts map shows the major changes wrought by Jessops Floating Harbour, begun in 1804 and completed in 1809. There are two major road bridges over the new route of the Avon and several more over the Frome in the centre of the city.

In 1711 one of these was built by Merchant Venturer, Abraham Hooke and Nathaniel Wade. It was called Traitors Bridge because of Ward’s part in the plot against King Charles II of England. Later it became Frome Bridge and is now the beginning of the culvert of the Frome which runs under the City Centre.

Wade, who had again been active in treason, saved his life by turning informer; he had considerable property in the city, and the remembrance of his treasons is still served there in the name Traitor’s Bridge given to the bridge he built over the Frome near Wade Street. Historic Towns Bristol – William Hunt – 1889

The development of the Floating Harbour creates Spike Island from Rownham in the West to Bathurst  in the East.

In 1740 what is now Mud Dock West was constructed and the Great Crane of Bristol was erected on the side of the new dock. In 1742 Wapping Dockyard was built. Tombs’ Dock was built at Dean’s Marsh in 1760 and Champions Dock built as a wet dock in 1762.

Then in 1753 the plan to build a bridge over the Avon Gorge at Clifton began its tortuous journey. Isambard Kingdom Brunel would not be born until April 9, 1806, in Portsmouth.

Building of Brunel’s design started  on 12th June 1831 but was halted by the Bristol Riots.

In the 1760s the Port Walls were demolished and the associated ditch filled in.

In 1809 Prince Street Bridge built as a drawbridge and Hillhouse and Sons moved from their Hotwells to what is now the Albion Dockyard. Also as part of Jessops grand plan there were two major crossings built over The New Cut, Harfords Bridge (Bedminster Bridge) and Hills Bridge (Bath Road). Also added were Bathurst Basin, built on site of Trin Mills and Totterdown Basin and their associated locks.

In 1839 the Great Western Dockyard was built and in 1841 St Phillips Bridge was built to replace the Counterslip Ferry.

The other big change is that in 1840 Brunel’s Great Western Railway came to Bristol requiring bridges across The Floating Harbour, The Cut (Avon) and the River Malago.

In 1874 Fullarton’s map what is striking is the large cull of bridges to the North over the Frome because of the extensive culverting. There is also a road bridge to the West onto Spike Island at Commercial Road.

After many years in the planning and 33 years in construction a modified design for Brunel’s Clifton Suspension Bridge had finally opened in 1864. Brunel had already died in 1859 at the age of 53.

In 1855 the coal barge, John, collides with Hills Bridge causing it to collapse with two killed.

In 1859  Mardyke Wharf was constructed and in the 1870s Princes Wharf was created from shipyards on Wapping. Also in 1870 the Pump House was built to power the locks and Howards Junction lock opened in 1873.

In 1866 the railway to Portishead was opened.

In 1874 the Midland Railway Wharf built at Avon Street and in 1876 Upper Railway Wharf was built at what is now Merchants Quay. In the 1890s the Canons Marsh quays were developed and E and W (Watershed) sheds constructed on what is now Bordeaux Quay.

By the 1920s The Docks Railway system had been added including a new rail bridge with a roadway over the top over the Avon at Ashton Avenue (opened 1906).

In 1883 Langton Street (Banana Bridge) and, and in 1900, Vauxhall Footbridges had been built  to link the growing suburbs of Southville and Ashton with the Centre.

In 1903 the Lime Kiln Dock was covered over for a railway wharf and by 1906 the Dock Railway system was being developed.

In 1934 a further section of St Augustines Reach was culverted to the junction of Broad and Narrow Quays and St Augustines Bridge was lost.

A further pedestrian bridge was opened in the 1930s linking Southville and Spike  Island to replace the Goal Ferry.

In the 1920s the Commercial Road Swing Bridge was built.

The Redcliffe Bascule Bridge opened in 1938 and had to be rebuilt after bombing in 1942.

In 1939 the Bathurst and Totterdown locks were decommissioned to reduce the risk that bombing would empty the docks. In  1941 St Phillips Bridge was destroyed in bombing and had to be rebuilt.

In 1968 the creation of the Inner Ring Road created a new bridge at Temple.

Between 1950 and 2018 there were some major changes in the infrastructure of the Docks. Starting from the West in 1965 The Plimsoll Bridge (named after Samuel Plimsoll who invented the safe loading line on ships) and Avon Bridge were opened providing a faster crossing across Cumberland Basin and The Avon, linking North to South. This also meant that the top deck on Ashton Avenue Bridge which carried the road over The Avon close by could be removed. The now single deck bridge was renovated in 2017 and now carries routes for the Metro Bus, cyclists and pedestrians.

Large parts of the Dock Railway became disused or built over leaving just a short stretch in use between M Shed on Princes Wharf, along Wapping Wharf and under Cumberland Road and along the Cut. This is used by old steam trains based at M Shed for leisure trips on Sundays and holidays in the summer. Following the loss of the railway track the bridge at Bathurst Basin becomes pedestrianised.

In the 1960s additional carriageways were added to the Bath Road and Bedminster Bridges to reflect the increased traffic.

In the early 1990s, the Bristol Development Corporation – a quango set up by the Conservative government with its own funding and freedom to regenerate a section of the city – proposed a weir on the River Avon where it runs between Spike Island and Southville.
It was thought the weir would provide attractive waterside views for homes and offices, thereby stimulating the regeneration of the former industrial area.
However, the plans would have affected flood-defence and drainage systems far beyond the corporation’s allotted area, which would have had to be addressed using money from other agencies. This, combined with a lack of funding for the weir itself, meant it was eventually forgotten.

There has been a substantial increase in pedestrian bridges over the Floating Harbour reflecting its increased leisure use. In 2000 Peros Bridge opened running across the route of an old ferry (Deans Ferry) in  St Augustines Reach between Farr Lane, Narrow Quay  and Millenium Square. The bridge is named after an African slave boy brought to Bristol in the 1740s.

Also in 2000 Valentines Bridge opened at Temple Quay and nearby a further pedestrian bridge Meads Reach (or the ‘Cheese Grater’) in 2008.

Then in 2017 the pedestrian Castle Bridge opened linking Castle Green with Finzels Reach.

The other new bridge was completed in 2016 and is more controversial. It links Cattle Market Road alongside Temple Meads with the old Diesel Depot site across the bend in the Avon, North of Bath Road.  This was earmarked as the site of Bristol Arena but after many delays this is now in doubt. It is called Brocks Bridge after the local Victorian builder, William Brock.

As of 2018 another new pedestrian and cycle bridge has been proposed to link Southville with Spike Island at Camden Road but its future is unknown. It would come on to the harbour  under the bridge taking Cumberland Road over the dock railway.