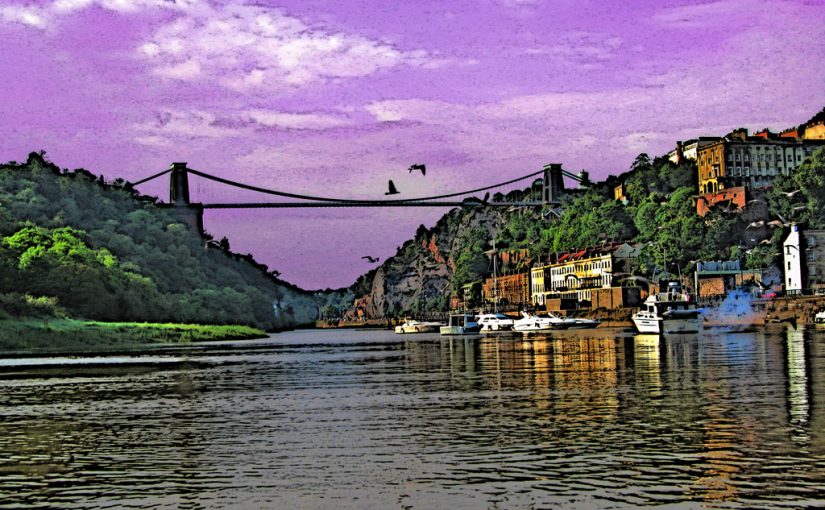 The Clifton Suspension Bridge must be one of the most famous and photographed bridges in the world.

It was planned as early as 1753 and was the subject of a number of design competitions.

After violent riots against a toll on Bristol Bridge (‘The Bridge’ at that point) in 1793, architect William Bridges unveiled a proposal for a new bridge that would pay for itself. He suggested a structure across the Avon Gorge in the spot where the Brunel-designed Clifton Suspension Bridge now stands. His design was so fantastic and otherworldly that the bridge that was ultimately built seems ordinary in comparison.

The multi-storey arch was to be flanked by six 40-ft storeys of rooms and galleries, containing homes, a granary, corn exchange, chapel and tavern, museums, general market, a library, a nautical school, offices, and stables. It would also feature a stone wharf on the Somerset side

Bridges was convinced the eye-wateringly expensive development would eventually amply repay investors, according to Eugene Byrne, the author of Unbuilt Bristol: The City That Might Have Been 1750-2050. However, it never raised the funds to go ahead.

Building of Brunel’s design started  on 12th June 1831 but was halted by the Bristol Riots later the same year.

The building stopped again in 1840 this time because of lack of funds. 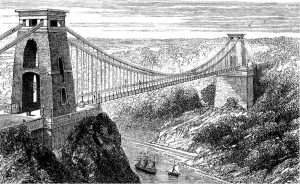 A modified Brunel design was then finally built and the bridge opened in 1864. Sadly Brunel was no longer with us as he had died in 1859. 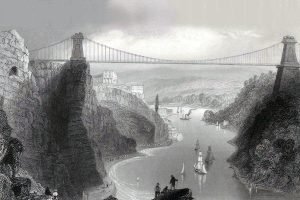 Opened in 11 March 1893 The Clifton Rocks Railway enabled people arriving by train or paddle steamer at the Hotwells Landing Stages to travel up to Clifton.

Alternatively you could arrive at Clifton Bridge Railway Station at Rownham on the Portishead line, opened in 1866, and get the Rownham Ferry across to Hotwells.

Hotwells Railway Station (originally called Clifton ) opened in 1865 and was connected to the port railway to Avonmouth. In 1871 it was taken over by Great Western Railway who connected it to Temple Meads via the tunnel under the Clifton Downs. The station was removed in 1921 to enable the building of the Portway Road.

Vessels -ss “Burrington Combe”, another aft and a Bratt Line ship aft of this. These vessels are dressed up with flags – civic occasion? Repair work under way on the river wall. 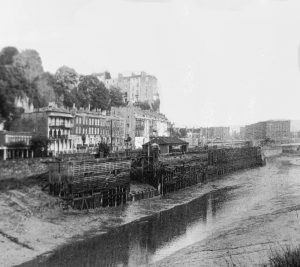 The Grand Spa Pump Room was opened on the rock above in Clifton in 1894.

Alternatively you could arrive at Clifton Bridge Railway Station at Rownham on the Portishead line, opened in 1866, and get the Rownham Ferry across to Hotwells.

The Rownham Ferry is known to have operated in 1200.