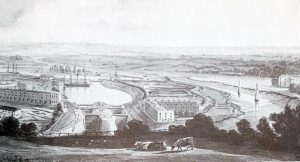 According to Wickipedia this is the first known photograph of a ship.

The buildings behind the ship in the picture above were lost in 1873 when Howards Lock was built.

Juverna arriving from Ireland with tug Alert with passengers for Rownham Ferry assembled at new place upstream to allow new entrance to Floating Harbour to be constructed.

The funnel and masts of a steamship can be seen in the Basin beyond. To the left are the houses of Hotwells, and above the lock footbridge the clock tower of the Harbour Master’s house can just be seen. 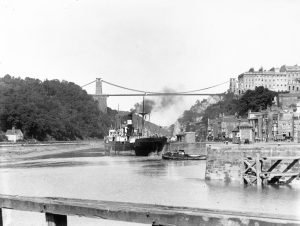 PBA545 Aug 1935 Seen from the outer end of Brunel’s entrance lock, ss ‘Montreal City’ is leaving the City Docks with m.t. Volunteer as stern tug. The lock gates are shown open in the photograph. The Clifton Suspension Bridge can be seen in the background, as can the houses of Hotwells and Clifton. At far left is Wellington Cottage; demolished in the 1950s, this was the last surviving dwelling on the Rownham side. – Bristol Museums Galleries and Archives

To the left of the middle of this picture you can see Merchants Dock, built in 1768 as Champions Dock. Its entrance was blocked off in 1965 and it was built over in the 1980s for the Rownham Mead housing development.

Above it is Hotwell Dock built in 1770 as Stotherts Shipyard and now Pooles Wharf Marina.

Clifton Suspension Bridge in the background and bust of Samuel Plimsoll to right of picture.

The Georgian building in the background (beyond the Ladies’ Waiting Room) was originally the Lower Assembly Room, a fashionable meeting place in the heyday of the spa at Hotwells. At the time of this photograph it was a school, soon to be demolished for the Cumberland Basin road scheme.

Plimsoll was born in Colston Parade, Redcliffe in 1824 and was MP for Derby 1868-1880. He died 1898. His untiring efforts to improve the safety of ships led to the Merchant Shipping Acts of 1875 and 1876, which made load-lines compulsory.

The bust is now at Porto Quay.

The Cumberland Basin Scheme was constructed between February 1963 and April 1965 and was officially opened to traffic on 14th April 1965. The overall cost of construction of the scheme was £2,650,000.

The bridge is listed Grade ll* and is on Historic England’s Register of Structures at Risk. In 2019 it was announced that Brunel’s is to be “saved” with a £62,000 grant from Historic England.

Part of original Junction Dock Gate from 1870 at Princes Wharf

Merchants Road swing bridge, was built by John Lysaght in 1925.

The Pump House was built in 1873 by Thomas Howard as a Hydraulic Pumping House to provide power to the bridges and machines of Bristol Harbour. It was replaced by the hydraulic engine house at Underfall Yard in the 1888. It became a Pub in the early 1880s.

In 2018 the City Council referred to the Cumberland Basin area as ‘Western Harbour’ and launched a development proposal covering 15 to 20 hectares of land, 75% of which is already owned by the council. The white line on the photograph below shows the land in question which includes the 1960 road system which would have to be replaced.

The land would be used for leisure and housing as depicted in the council model above.