One of the things that has been in constant change in Bristol City Docks over the last thousand years is what sections have been called as their function evolved from Meads and Marshes. This is complicated by the fact that the same place can have more than one name at the same time and that is before you get to the vagaries of spelling. From 1066 Old English was being moulded by by the French invaders both with new words and different pronunciations and spellings. A classic example in Bristol Docks was the gradual replacement of the Old English word ‘Key’ by the French ‘Quay’ which endures until today. Take for example the largely industrial Redcliffe Back in 1950 which has morphed now into Redcliff Quay which is largely housing and offices. Note the older spelling of Redcliff.

A rather odd driver for change in spelling was that printers tended to lengthen words. This was driven by money – they were paid by the number of lines printed.

Another issue has been that over the years most people couldn’t read or write and so place names were passed on by memory and word of mouth. It is not surprising that there are many alternative spelling for the same place. After all even Shakespeare spelt his name in different ways.

Then we ask what are the differences between Ports, Docks, Quays (Keys), Wharves and Piers? They are often used interchangeably but a dictionary would say a port is a harbour or a town with a port.  A dock is an artificial enclosure near a harbour or river where ships are berthed, loaded, built, etc. Docks where ships are built or repaired are often Dry Docks, that is they have lock gates and the water can be pumped out to provide dry access to the hull.

A quay is a landing place, built usually of stone, next to navigable water where a ship can load and unload. Wharf is a synonym of quay but maybe made of wood.

A pier is a structure built out over water to act as a landing stage, often with deeper water at its end.

The map of Bristol in 1066 contains little detail about what things were called and it does not, for example, confirm that the River Malago or the brooks flowing into Colliters Brook had these names then. However, Lewins Mead (Leofwines Mead) has stayed the course, albeit from meadow to shopping street.

By 1250 the unattributed map (it does have the initials A.S.E) and maps of the castle it is possible to piece together the additional bridge’s names, many associated with gates to the castle or its outer fortifications. Some like Temple Gate and New Gate persist until today.

The map shows Canons Conduit which was a channel to bring water from Jacobs Wells/Sand Brook down to St Augustines Abbey.

The castle had originally been built by the Normans in 1088 of wood and then was rebuilt in stone in the 1100s.

The first phase of St Augustines Abbey (now Bristol Cathedral) was built by 1148 which gave birth to the name Canons Marsh which is still used albeit less in recent years.

Between 1240 and 1247 the course of the River Frome was diverted to give more dock space. The original course had gone roughly along St Stephens and Baldwin Streets entering the Avon South West of Bristol Bridge. The new dock area was called either New Channel or St Augustines Trench rejoining the Avon at Cannons Marsh.

There is mention of Rownham Ferry dating back to the 1200s.

Millerd’s map of 1673 is very detailed but only covers from St Augustines Reach around to Temple Meads. It describes Broad Quay as The Key and Narrow Quay as The Wood Key. Welsh Back was called St Nicholas Back.

It also refers to Trine Mills at the mouth of the Malago River where it enters the Avon. On previous maps (including 1066) it is referred to as ‘Mill’ or ‘Mills’. The name lives on as a row of housing at Merchants Quay.

Millerd said “The Cittie of Bristoll standeth upon ye borders of Somerset and Gloucester shiers but belongeth to neither but is a cittie and countie itself.” This followed from a decree by Edward 111 which incorporated Bedminster and Redcliffe into the City, North of the Avon in 1373.

In 1497 John Cabot set of to North America from Bristol in The Matthew a replica of which is based at Princes Wharf. While Bristol claims him as one of their own he was born in about 1450 in Italy as Giovanni Caboto and only came to Bristol seeking finance for his explorations.

By 1737 Bristol overtook London as England’s number one slaving post with 37 voyages that year. Bristol was in turn to be overtaken in 1747 by Liverpool.

In 1760 Tombs Dock was built at Deans Marsh and later in the 1760s the Port Walls were demolished. In 1768 William Champion built Champions Dock at a point to the East of where the Pump House is now but by 1770 he was bankrupt and it was taken over by the Merchant Venturers and called Merchants Dock.

Note in the map above the Hilhouse’s Redclift Shipyard which operated between 1780 and 1786 to the South and East of the mouth of Colliters Brook. 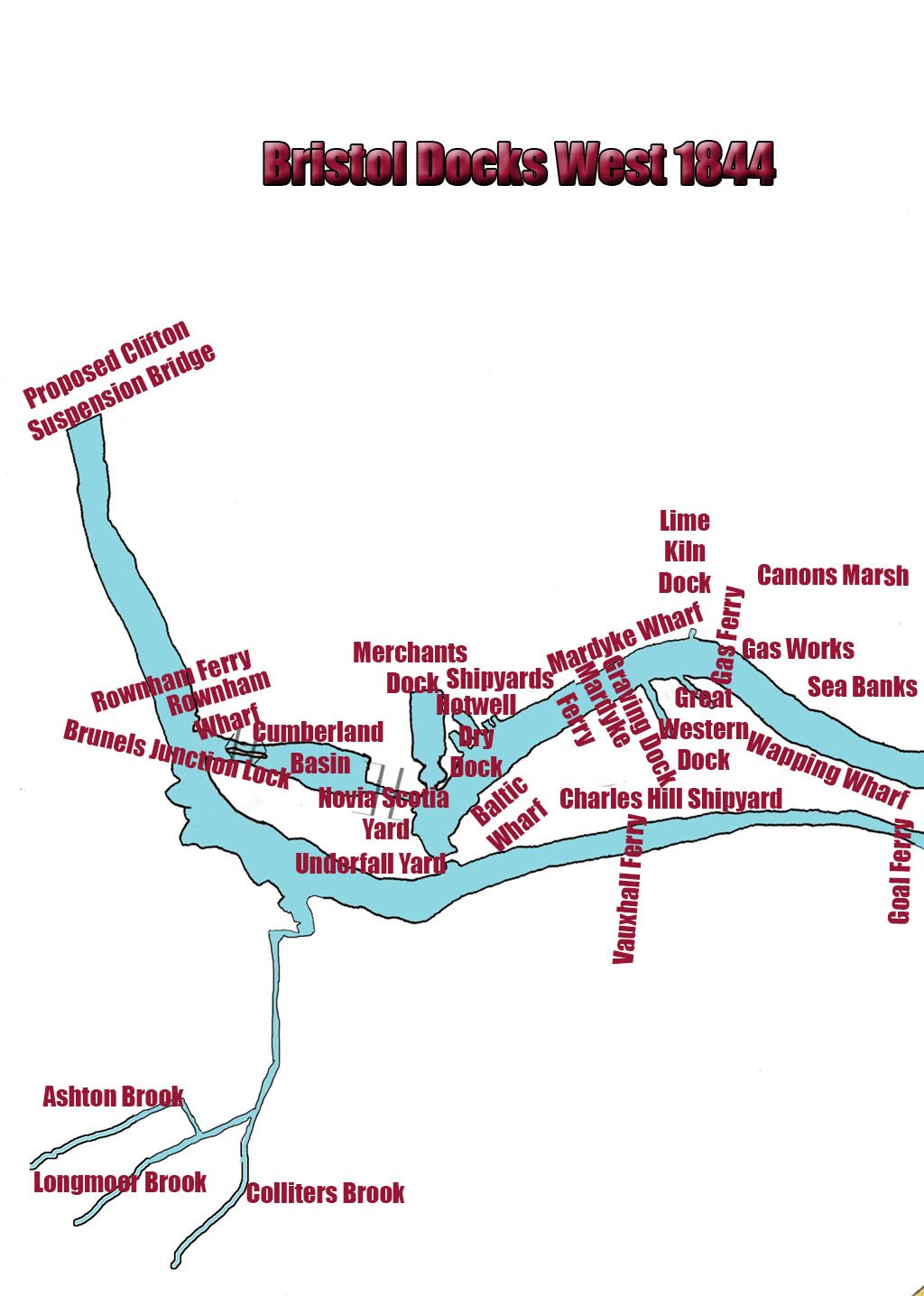 In 1844 Chilcott’s Guide Map was published which is not only detailed but covers the whole area between the proposed Clifton Suspension Bridge and Totterdown Basin.

This shows the major changes following the development of Jessop’s Floating Harbour. The two major bridges across The Cut (new course of the Avon) are Halford Bridge, now Bedmister Bridge and Hills Bridge, now Bath Road Bridge. Both were named after the engineers that built them and opened in 1809. Prince Street Bridge is also opened in 1809 as a drawbridge linking the city to Spike Island. Then in 1815 the Commercial Road Swing Bridge joined Redcliffe to Spike Island across Bathurst Lock.

The other major new bridge is St Phillips which replaced a ferry at Counterslip in 1841. It would remain a toll bridge until 1875.

At this time (1844) IK Brunel was engaged in considerably improving the original Jessops Junction Lock at Cumberland Basin.

There were by then numerous docks and shipyards dug into the sides of the Floating Harbour.

Champion’s Wet Dock was built by William Champion to the East of Cumberland Basin in 1768 but following his bankruptcy became Merchant’s Dock in 1770. To the East of this Stotherts Shipyard (Hotwell), a dry dock, was built in 1770. The Graving Dry Dock in Charles Hill Shipyard was built in 1809 and still operates as a working dock. Adjacent stood Great Western Dockyard which was built in 1839 to build the SS Great Britain which was launched in 1843.

On the North side of Wapping were numerous shipbuilding docks on the sites of Princes Wharf and Merchants Quay. On the West side of the mouth of Augustines Reach was Albert Dry Dock. Then along the Grove was first Mud Dock (West) followed by Mud Dock (East).

At some time after 1673 a bridge was built over St Augustines Reach opposite Small Street and was called St Giles Bridge after the Castle Gate and Church of St Giles which was demolished in 1309. This was replaced by the Stone Bridge. In 1780 Froome Gate Bridge became St Johns Bridge. 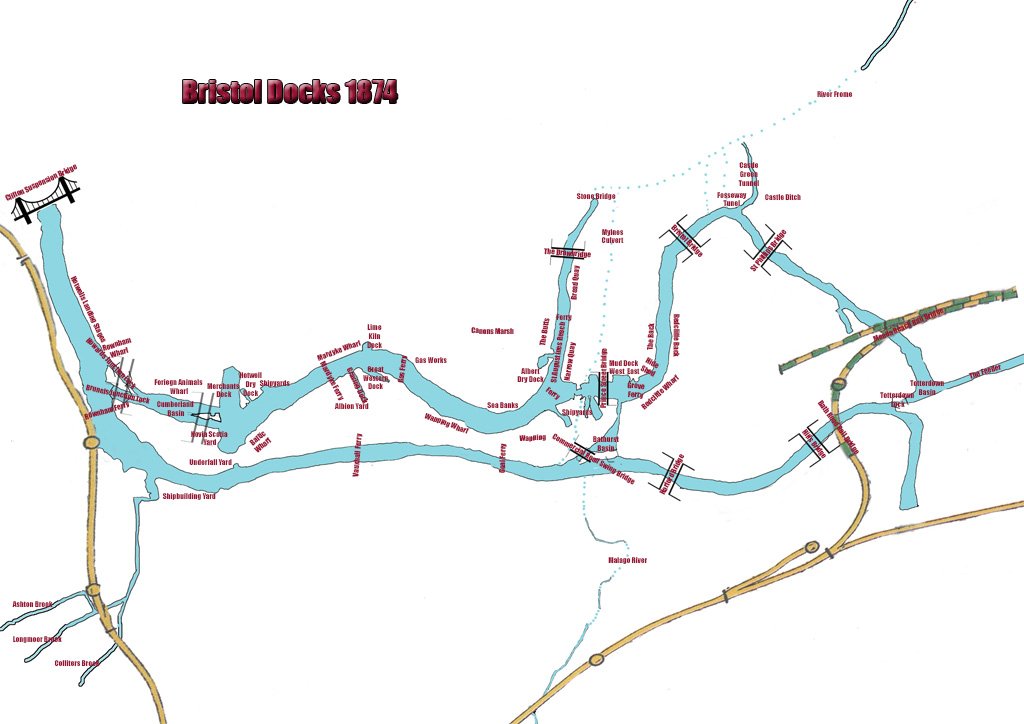 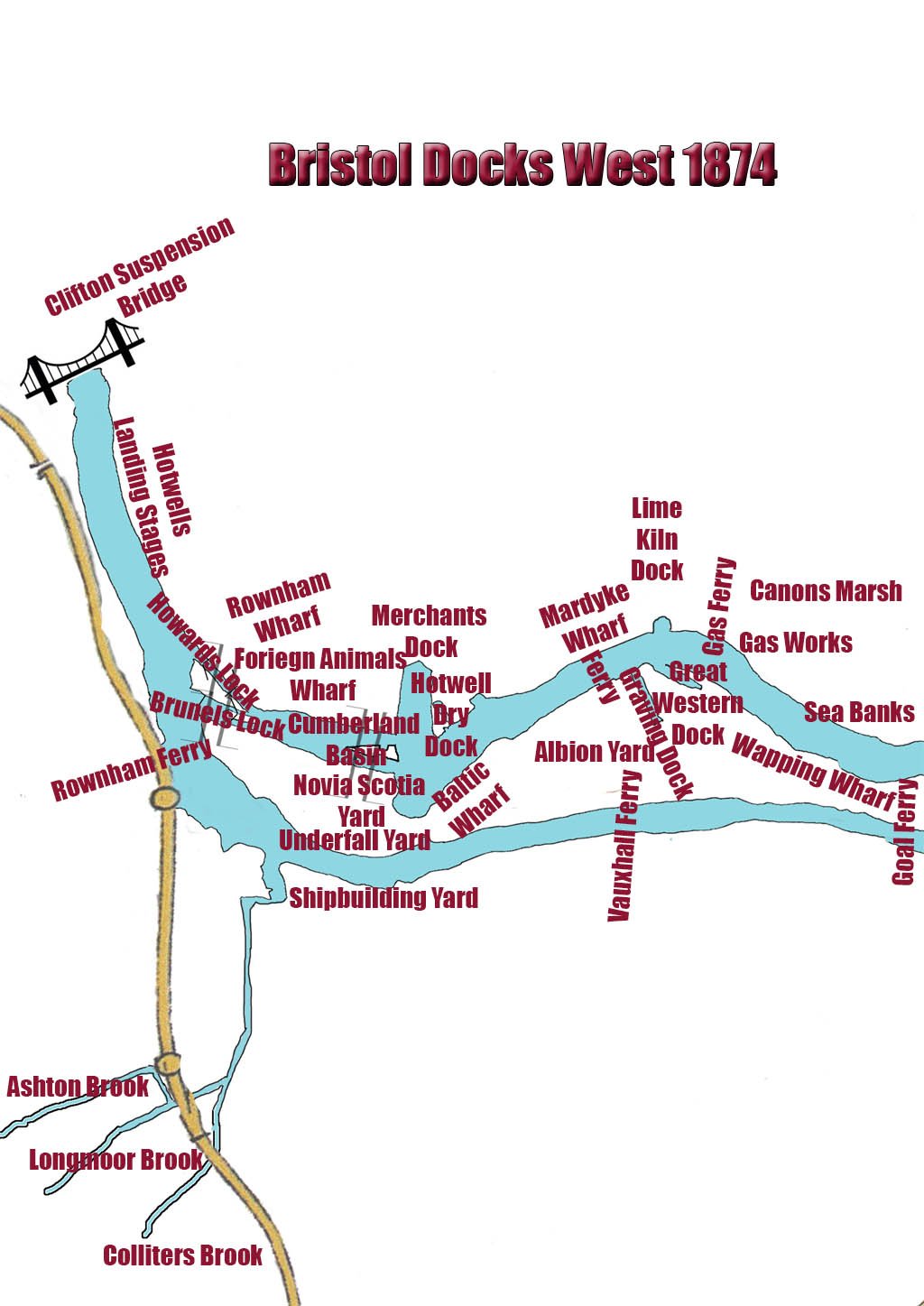 In 1846 Conrad Finzel rebuilt a sugar refinery so that it became one of the largest in England leading to that section of the docks being called Finzels Reach a name that continues in the housing development on the site.

It was in 1848 when Charles Hill and Sons shipbuilders became The Albion Dockyard. 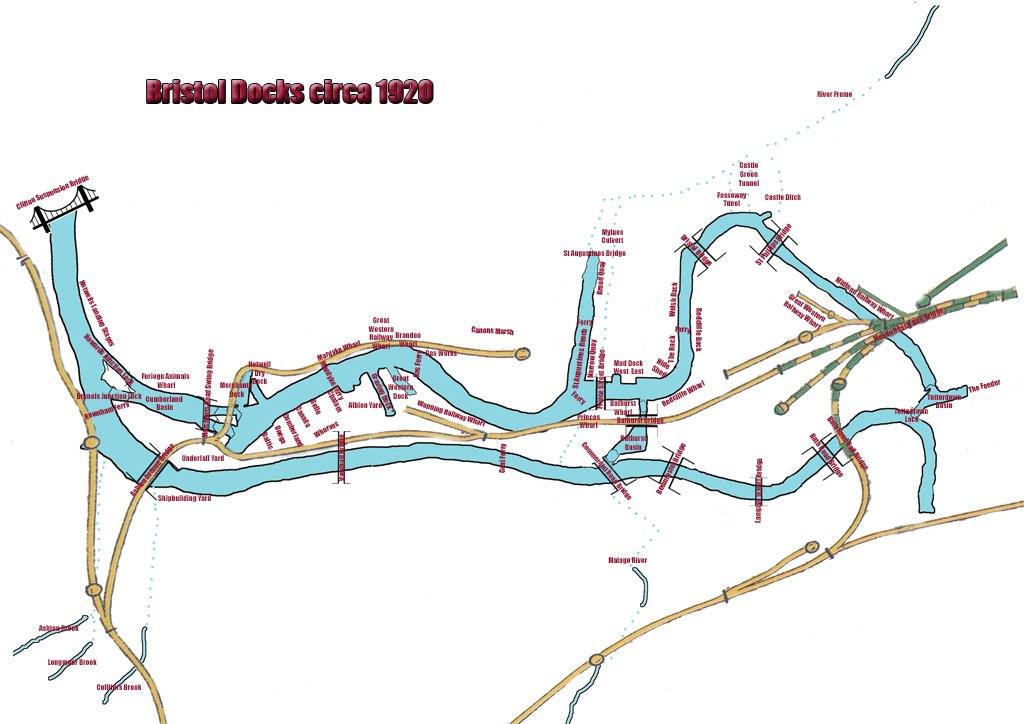 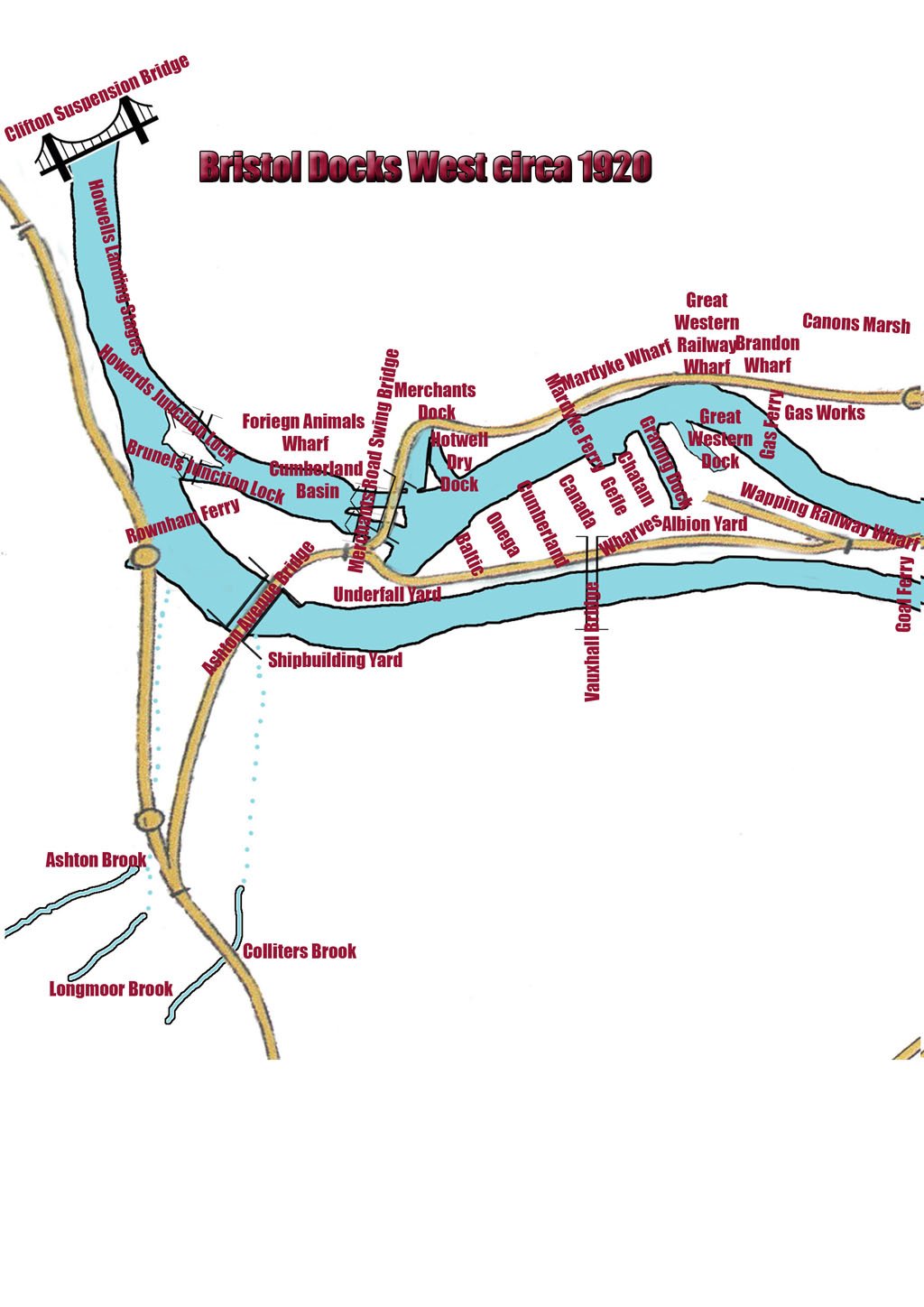 In 1877 Avonmouth Docks were completed followed by Portishead Docks in 1879 decreasing the importance of Bristol Docks for larger ships. Bristol Corporation took over both of these Docks in 1884 so that they could be run in unison.

In 1885 Hills Bridge was rebuilt as the Bath Road Bridge. Then in 1898 Kings Wharf (probably named after Kings Marsh) was renamed Avonside Midland Railway Wharf.

In 1906 the Ashton Avenue Swing Bridge was opened,  it had a rail way with a road way overhead,Bristol City Docks.

By the 1920s there were another five timber yards and wharves between Baltic Wharf and Albion Yard – Onega (Russia), Cumberland, Canada, Gefle (Sweden) and Chatham. Three of these live on as streets in the 1980s Baltic Wharf development – Gefle Close, Canada Way and Cumberland Close. 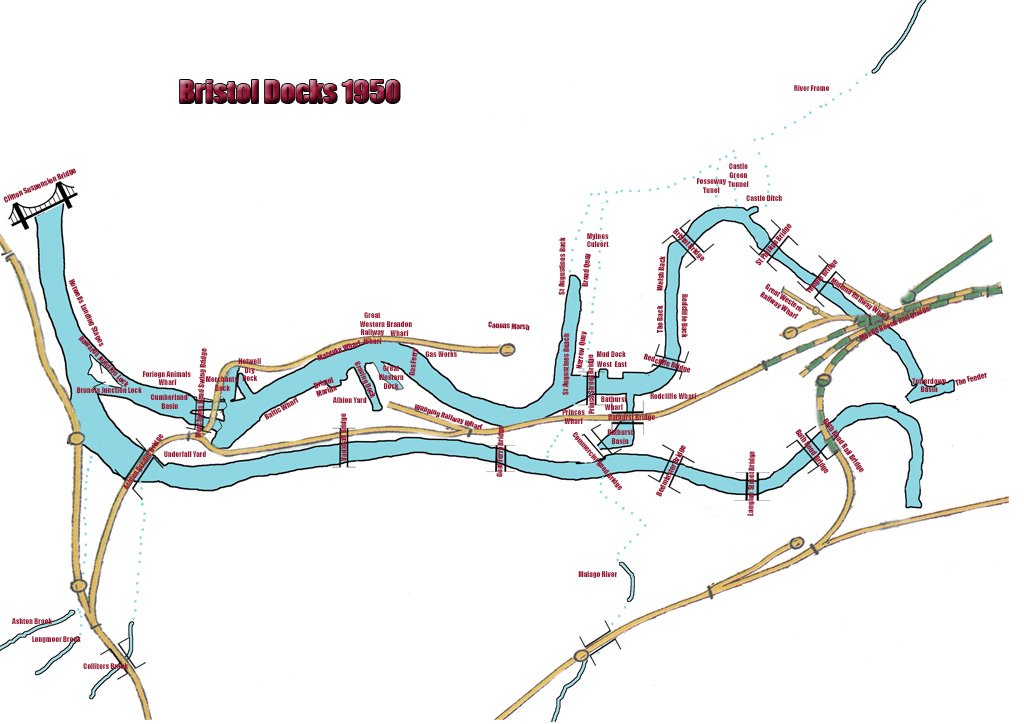 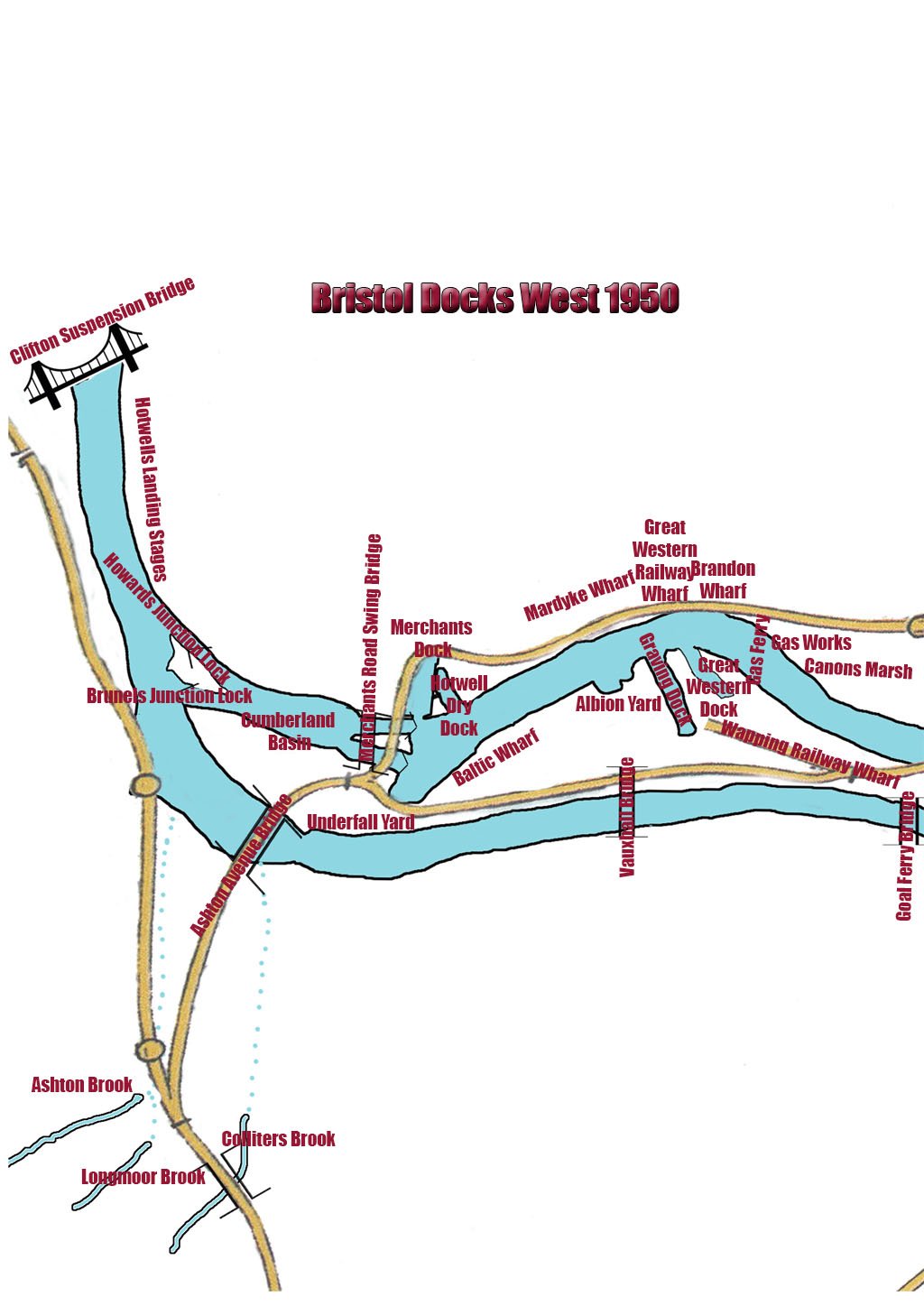 In about 1935 Goalferry Pedestrian Bridge was built to replace the ferry.

In 1938 Redcliffe (road) Bridge was built as a bascule bridge (draw bridge with counterweight). Again it replaced a ferry. It was bombed in 1942 and had to be rebuilt. It opened regularly until the 1980s but now only opens on special occasions.

Also in 1938 the final bit of the Frome was culverted from Baldwin Street to the bottom of Park Street where it is in 2018.

With the onset of war in 1939 the Bathurst and Totterdown locks were decommissioned as it was thought they could easily be bombed and empty the harbour back into the cut.

In 1941 St Phillips Bridge was bombed and had to be rebuilt.

In 1947 Bristol was twinned with the German city of Hanover which would lead to the naming of Hanover Quay along the south of Cannons Marsh. This was a peace gesture as both cities had suffered greatly in World War Two.

In the same year Bristol twinned with the French city of Bordeaux which has traded with each other since the twelfth century. This would lead to the naming of Bordeaux Quay.

Also in 1965 Plimsolls (swing) and Avon Bridge were opened to provide a fast road link from North to South. This led to the removal of the road deck of Ashton Swing Bridge.

In 1970 it was announced that the commercial docks in the Harbour were to cease and by the mid 70s the area was on a new trajectory towards housing and leisure.

In the 1970s Midland Railway Wharf was called Phoenix Wharf after the insurance company. In 1972 the Mardyke Ferry ceased operating.

In 1984 Porto was twinned with Bristol leading to the naming of the dock area between Mardyke Wharf and Hanover Quay being called Porto Quay.

During the 1980s the Bristol ( sometimes called Baltic Wharf) Marina was dug out from the Albion Dock Yard and Chatham Wharf timber yard.

In the 1990s part of the old gas works site was dug out to create the Harbour Inlet Marina.

As part of the Millenium celebrations in 2000 Peros Bridge across St Augustines Reach and Valentines Bridge at Temple Quay were opened. Peros Bridge was named after an African slave boy brought over to serve the Pinney family in the 1740s.

In 2008 the Meads Reach pedestrian and cycle bridge opened but is universally known as the ‘Cheese Grater’ because of its metal open weave construction.

In 2016 Brocks Bridge over the Avon from Cattle Market Road, near Temple Meads to the old Diesel depot. William Brock was a local Victorian builder and entrepreneur. The Old Diesel Depot was to become the Bristol Arena but may now become commercial and housing.

In 2017 Castle Bridge was opened, a pedestrian bridge linking Castle Green with Finzels Reach. It is called Finzels Reach because there was a sugar refinery there from 1681 and in 1846 a much larger refinery was built there by one Conrad Finzel.